Skip to main content
Numerous laptop models of Sony's VAIO series infringe a patent of Virtual Paper Licensing. This was decided by the Düsseldorf Court of Appeals in patent infringement proceedings that have been going on for 8 years. Virtual Paper... 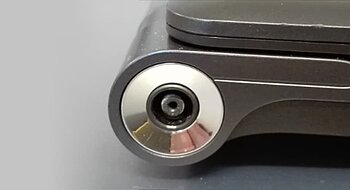 Düsseldorf, 04.12.2020: Numerous laptop models of the well-known VAIO series manufactured and distributed by Sony infringe patent EP 1 659 501 of Virtual Paper Licensing GmbH, a company founded by inventor Glenn Rolus Borgward together with investors. This was decided by the Düsseldorf Court of Appeals in patent infringement proceedings that have been going through the instances for 8 years (Ref.: I-15 U 77/14). Sony was ordered to pay damages to Virtual Paper which will result from the sales figures of the notebooks concerned to be presented by Sony. The judges did not allow an appeal on points of law, but Sony has the possibility of lodging an appeal on points of non-admission.

The patent relates to a hinged interface developed by Borgward which significantly improves the ergonomics of hand-held electronic devices. In the nullity proceedings running parallel to the infringement dispute, the Federal Supreme Court (BGH) had limited the patent claim in its landmark decision "Digital Book" at the end of 2017 to the extent that the solution only applies to a "digital book" (decision of 7.11.2017, Ref.: X ZR 63/15). In the grounds of the judgement, however, the judges in Karlsruhe had clarified that the scope of protection of the patent covers laptops and notebooks to the extent that they could be handled like a book in terms of size, weight and arrangement of the operating elements and comprised the interface in the swivel joint as described in the claim. The Düsseldorf Court of Appeals now relied on this interpretation by the BGH.

“International corporations are well advised to adequately remunerate developers and patent holders when using innovative technical solutions from third parties. The judgement shows that even if a patent was limited by the Federal Supreme Court it can be a basis for a successful infringement action”, explains partner Olaf Giebe of KLAKA Rechtsanwälte, who represented Virtual Paper Licensing before the Düsseldorf Court of Appeals.

The patent holder is now preparing to continue to enforce its rights against Sony and other patent infringers, including in the other European countries where patents have been granted, the US and Japan. In addition, claims from parallel patents in Europe and the US allowing an accumulator to be accommodated in the rotating hinge of laptops are being examined.

Virtual Paper Licensing was advised and represented by KLAKA Rechtsanwälte led by partner Olaf Giebe in the infringement proceedings before the Düsseldorf Court of Appeals. KLAKA had taken over the representation in 2018 in the current second instance from the law firm Grünecker. The opposing party was and is represented in all instances by attorney Klaus Haft of Hoyng Rokh Monegier in Düsseldorf and patent attorney Stephan Keck of WITTEWELLER Patentanwälte in Stuttgart.